As a magical revolution remakes a city, an ancient evil is awakened in a brilliant new novel from the Hugo-nominated author of Foundryside and the Divine Cities trilogy.

A few years ago, Sancia Grado would’ve happily watched Tevanne burn. Now, she’s hoping to transform her city into something new. Something better. Together with allies Orso, Gregor, and Berenice, she’s about to strike a deadly blow against Tevanne’s cruel robber-baron rulers and wrest power from their hands for the first time in decades.

But then comes a terrifying warning: Crasedes Magnus himself, the first of the legendary hierophants, is about to be reborn. And if he returns, Tevanne will be just the first place to feel his wrath.

Thousands of years ago, Crasedes was an ordinary man who did the impossible: Using the magic of scriving—the art of imbuing objects with sentience—he convinced reality that he was something more than human. Wielding powers beyond comprehension, he strode the world like a god for centuries, meting out justice and razing empires single-handedly, cleansing the world through fire and destruction—and even defeating death itself.

Like it or not, it’s up to Sancia to stop him. But to have a chance in the battle to come, she’ll have to call upon a god of her own—and unlock the door to a scriving technology that could change what it means to be human. And no matter who wins, nothing will ever be the same.

The awe-inspiring second installment of the Founders Trilogy, Shorefall returns us to the world Robert Jackson Bennett created in his acclaimed Foundryside . . . and forges it anew.

“Absolutely riveting . . . I felt fully, utterly engaged by the ideas, actually in love with the core characters . . . and in awe of Bennett’s craft. I went to bed late reading it and woke up early to finish it. . . . A magnificent, mind-blowing start to a series I’m hungry for.”—Amal El-Mohtar, The New York Times Book Review

“An epic, breathtaking novel that’s as much cyberpunk as it is fantasy. . . . Bennett lays out a fantastic story ladened with fantastic characters, but it’s his take on magic [as computer code] that stands out here.”—The Verge

“[Featuring] a distinctive setting and a defined and . . . novel technology of magic . . . [this] is magic-plus-industrialization with a grimy feel about it, far removed from the green world of Tolkien’s Middle-earth.”—The Wall Street Journal

“Promises to be a home-run series for Bennett . . . [featuring] expert writing, complicated and distinct characters, and an intriguing, deadly, wonderful new city called Tevanne, where reality can be shuffled like a deck of cards.”—Tordotcom

“Complex characters, magic that is tech and vice versa, a world bound by warring trade dynasties: Bennett will leave you in awe once you remember to breathe!”—Tamora Pierce

"The gates are just ahead,” said Gregor. “Get ready.”

Sancia took a breath and steeled herself as their carriage lumbered through the pouring rain. She could see the lights atop the campo walls from here, bright and sharp and cold, but little more than that. She rubbed her hands together, her fingertips trailing over the calluses on her palms and knuckles, now a shadow of what they’d been during the prime of her thieving days.

Berenice reached over, grabbed her hands, and gave them both a squeeze. “Just remember the plan,” she said. “Remember that, and nothing will go wrong.”

“I remember the plan,” said Sancia. “I just also remember there’s a lot of spots in the plan that say, ‘Sancia improvises a bunch of shit.’ Which is not, you know, comforting.”

“We aren’t getting nervous back there, are we?” said Orso from the pilot’s cockpit. He turned around to look at them, his faded blue eyes wide and wild in his dark, craggy face.

“A little anxiety,” said Berenice, “is understandable under these circumstances.”

“But being as we’ve worked our asses off for the better part of six months to get here,” said Orso, “I’m a lot less willing to understand it.”

“We are just scrivers going to make a deal with a merchant house,” said Orso, turning back around. “Just four grubby scrivers looking to sell our designs and make some quick cash. That’s all. Nothing to worry about.”

“I see the walls,” said Gregor. He adjusted the wheel of the carriage and slowed its progress to a crawl.

Orso peered forward. “Uh. Well. I will admit that is a little worrying.”

The walls of the Michiel Body Corporate campo emerged from the driving rain. It looked like the Michiels had made some substantial additions since Sancia had last seen them. For starters, the walls were now about forty feet taller, spackled with new gray masonry—­that must have taken some work. But it was what sat on top of the new masonry that caught her attention: a series of large, long bronze boxes, installed on the walls about every hundred feet, each one sitting on some kind of swivel stand.

“That is a shitload of espringal batteries,” muttered Orso.

Sancia studied the espringal batteries, still and dark in the rain. She watched as a bird flew close to one, and it snapped up, the end of the long box tracking the bird’s flight like a cat might watch a passing bat. The box apparently decided the bird was no cause for concern, and returned to its original position.

She knew how such rigs worked: the batteries were filled with scrived bolts—­arrows that had been convinced to fly preternaturally fast and hard—­but the critical bit was that the batteries had been scrived to sense blood. If a battery sensed a bit of blood that it didn’t recognize, it would point its bolts at whoever happened to contain that blood, loose them all, and shred the target to pieces—­though the scrivers who designed them had been forced to work quite hard to get them to stop wasting ammunition on stray animals. Especially the gray monkeys, which confused the batteries a great deal.

It was not an elegant solution. But it worked—­people did not approach any campo wall at all anymore.

“What guarantees do we have, Orso,” said Gregor, “that those things will not shoot us to pieces?”

Their carriage hit a bump, and gray-­brown water sloshed up the sides, spilling into the floorboards.

“I guess we’re about to find out,” said Orso.

The gates of the Michiel campo were just ahead now. Sancia could see guards emerging from their stalls, weapons at the ready.

Their carriage rolled to a stop at a checkpoint before the gates. Two guards approached, both heavily armored, one carrying a very advanced espringal. The armed Michiel guard stood about twenty feet away from the carriage with his espringal lowered, while the other approached and gestured to Gregor. Gregor opened the door and climbed out, which made the Michiel guard a little nervous—­Gregor was about a head taller than him, and wearing light leather armor embossed with the Foundryside loggotipo.

“You lot Foundryside?” asked the guard.

“I am under orders that you must all be searched before you are permitted into the campo.”

They exited the carriage one by one and stood in the rain while the guard patted them down. After this, he checked the carriage. It was a rather shabby scrived carriage, one Gregor had rented from an iron trader—­its wheels sometimes forgot which way they were supposed to roll—­but this had been a strategic choice: the more they looked like a firm down on their luck, the more the Michiels would believe it.

The guard opened the compartment in the back. Inside was a large wooden chest, which was sealed shut with a bronze lock.

“I must examine them.”

Orso shrugged, unlocked the chest, and opened it. Inside were some bronze plates covered with sigils, a few scriving tools, lots of very large books, and nothing else.

The guard shut the compartment. “Very well. You may proceed.” He handed them each a sachet—­a small bronze button with a set of sigils engraved on it. “These will make sure the wall batteries and the other measures won’t consider you a threat. These expire in five hours, mind—­after that, all the campo defenses will begin targeting you.”

Orso sighed. “And here I thought I’d missed life on the campo.”

They climbed back into the carriage. The bronzed gates cracked and slowly swung open, and Gregor nudged their tiny, shabby carriage through.

But Sancia knew this was the easy bit. Very soon, everything would get a lot harder—­especially for her.

Berenice squeezed her hand again. “Move thoughtfully,” she whispered. “And bring freedom to others. That’s what we’re doing, right?”

“Yeah,” said Sancia. “I guess it’s just that normally when I try to rob a merchant house, I break in—­not make a goddamn appointment and dance through the front gate.”

Their carriage rattled on into the campo.

Sancia had never been to the inner enclaves of the Michiel campo, so she hadn’t been sure what to expect. She was aware that the Michiels, who were known for being the most accomplished at manipulating heat and light—­as well as for being insufferably artsy snobs in general—­had one of the most impressive campos in Tevanne. But as Gregor drove their carriage into the depths of the campo, she found she had not expected . . . this.

Buildings wrought of glass blossomed out of the streetscapes, and twisted and rose and ran together, their innards glimmering with a warm, entrancing luminescence. Whole walls had apparently been converted into art displays, their surfaces shifting and changing to show beautiful, looping designs that moved.

And then there were the suns.

She stared at one as it came close. Most campos used floating lanterns as the preferred method of illumination, but it seemed the Michiels had not been satisfied with this. Instead, they had created some kind of giant, glittering, glowing orb that slowly drifted about three hundred feet above the city streets like a miniature sun, bathing everything below it in something very close to daylight. It would have been an astounding sight at any time, but it was especially striking now, drifting along in the pouring rain.

“Yes,” said Berenice. “You can see the tops of the suns from certain towers in the city, I’ve been told.”

They rumbled on through the towers until they were stopped again at the next gate. There they were instructed to get out of their carriage and into another one—­this one a Michiel carriage, full of Michiel guards. The Foundrysiders obeyed, Gregor carrying their locked box, and the carriage took off for the innermost sanctum of the Michiel campo, close to the illustris—­the head building of the entire merchant house.

This was not their destination, however. Instead their carriage rumbled toward a tall, violet, shimmering structure studded with tiny round windows—­the Michiel Hypatus Building, where the house scrivers experimented with sigils and logic, finding new ways to reshape reality to their liking. 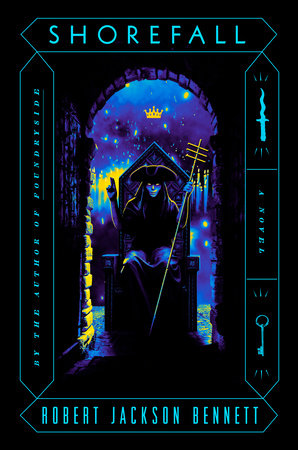 As a magical revolution remakes a city, an ancient evil is awakened in a brilliant new novel from the Hugo-nominated author of Foundryside and the Divine Cities trilogy. A few years ago, Sancia… END_OF_DOCUMENT_TOKEN_TO_BE_REPLACED 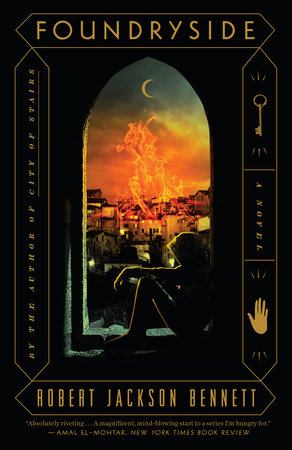